THE 25 FESTIVAL DE JEREZ IS PRESENTED

You are here:
Flamenco News 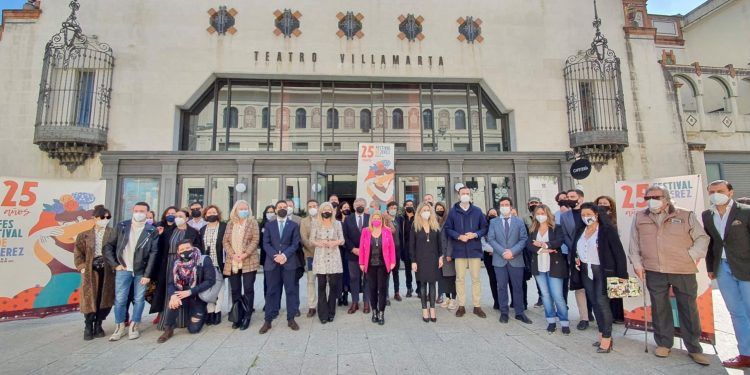 Presentation of the 25 Festival de Jerez

The Jerez Festival will celebrate its 25th edition between May 6 and 22 as a symbolic “hug”  between artists and fans.

A symbolic “hug” in this new normality imposed by Covid 19 -as this is reflected in its advertising poster- that highlights the “open” nature of the contest, conceived as “a meeting place in a welcoming city that lives the Flemish”.

This was announced today by  Mamen Sánchez, mayor of Jerez , in the presentation of the artistic program to the media. Also present at this event were  Patricia del Pozo , Minister of Culture and Historical Heritage of the Junta de Andalucía; and  Isamay Benavente , director of the contest; as well as representatives of collaborating organizations and companies.

The first municipal authority highlighted that, since its inception, the  Festival has been “a welcome home for both artists and fans, as well as for students and teachers of their courses and workshops . “

A closeness that, in his opinion, is reflected in that “embrace” of the advertising poster, but that “goes beyond the symbolic, since it connects with the reality of an open, welcoming city that lives flamenco”.

Likewise, it reflects “the open character” of the show to the different aesthetic lines that “flamenco addresses in its incessant creativity”; the confluence of different artistic generations and “between those who share the same stage”.

In his opinion, the poster exhibits “the gratifying life experience that the Festival has become for those who have been part of it in one way or another in its different editions.” Thus, the Festival becomes “a bond with a city that goes beyond the stage.”

Mamen Sánchez  added that “the successful trajectory” of the exhibition in these 25 years is explained by the fact of “maintaining its identity.” “Therein lies its prestige: this is a solid, well-conceived project with clear objectives.”

Among these objectives, in addition to the artistic ones, he valued the promotion of the city abroad. “It is an event designed as a global and inclusive project that strengthens our cultural industry as a  generator of employment and wealth, ” he said.

After noting that the  XXV Festival de Jerez will take place in a national and international context marked by uncertainty , the mayor of Jerez stated that “we will approach this edition with the courage that it requires to face and adapt to the ‘new normal’ implemented by the Covid 19 “.

“We will offer a sure Festival that, how could it be otherwise, will comply with current health regulations during its celebration in its different stages and spaces,” he said.

In his opinion, the contest constitutes  “a fundamental piece” of Jerez’s candidacy for the European Capital of Culture in 2031 , a project conceived beyond the municipal term and that “combines all the strengths of the province of Cádiz.”

A Festival of “illusion and hope”

For her part,  Patricia del Pozo, Minister of Culture and Historical Heritage of the Junta de Andalucía,  ventured that the next edition of the Jerez Festival “transmits enthusiasm and hope” and stressed that now more than ever it is “more necessary institutional support”

After pointing out that Jerez is the “cradle of flamenco” and the perfect symbiosis between the city and this unique art takes place, he emphasized that the contest “serves to remind us of its universal character” and its ability to promote “social cohesion” and promote “Meeting points”.

In this regard, he listed its prominent role in job creation and thus in wealth creation and economic development.

In her speech, the Minister of Culture and Historical Heritage highlighted  “the exemplary behavior ” of the culture sector in these times of restrictions as a result of the pandemic. “It has been known to adapt to this new normal,” he added.

“We are present in many important projects and, without a doubt, this is one of them,” said Antonio González Mellado, delegate of Culture of the Diputación de Cádiz, an institution that is collaborating with the exhibition for the first time.

“Our support is strong and firm,” he said, since “it is time to allocate more resources to culture in these difficult times.” “Flamenco is an intrinsic value of the province”, he clarified.

For  Isamay Benavente, director of the event, this 25th edition is “special and emotional”. “The embrace of the poster image is what we need now . Give a powerful hug to artists, public, to all those who have been with us during these years ”. A hug as an expression of “an act of love towards culture,” he added.

On the programming of shows, he reported that ” it has been reduced a little given the circumstances” posed by the pandemic at the moment .

Within the framework of these ‘silver wedding anniversary’ one of the lines of the program is marked by the inclusion of those artists “who are part of the history of the event” and constitute the present of the dance. “If this Festival is great it is thanks to them,” he clarified.

He also mentioned the good representation of Jerez artists, without forgetting the “great voices” of cante and the value that is always given to young talents.

The schedule of the XXV Festival de Jerez will offer  33 shows in four different stages -Teatro Villamarta, Sala Compañía, Museums of the Watchtower and Sala Paúl-, of which 12 are absolute premieres .

Of the four premieres scheduled at the Villamarta Theater, the first of them corresponds to  Eva Yerbabuena , who will open the show with her new show ‘Like you’.

The main stage of the Villamarta Theater will also host the premiere in our country of Mercedes Ruiz’s ‘Second Skin’   and the presentation in Andalusia of María Pagés’s ‘Paradise of the Blacks’  .

Other shows will have a compilation character – this is the case of  the Andalusian Flamenco Ballet -; They will evoke important milestones in a long artistic career – the  Antonio Márquez Company – or they will look back to the future – such as the  María Mar Moreno Company -.

In addition, Rocío Molina’s avant-garde dance is included with ‘Al fondo riela’, that mixture of tradition and contemporaneity that always guides  Ángel Rojas  –’Ya no seremos’- and  Andrés Marín  who, together with  David Lagos , has won several awards in the last edition of the Seville Biennial with his ‘¡Fandango!’.

All this without forgetting the last National Dance Award,  Jesús Carmona , with ‘El Salto’, his most risky creation.

In Sala Compañía  Andrés Peña he  will sound the ‘Bells of Santiago’, the new show by the Jerez-born bailaor. But it will not be the only premiere that this stage will host in its different cycles.

And the cantaoras Melchora Ortega (‘Film Flamencas’) -with the collaboration of the bailaora Pilar Ogalla- and  Tamara Tañé  (‘ Mis tres puñales), also with the participation of the dance of Saray García, Miguel Ángel Heredia and Juan Antonio Tejero.

The absolute premieres will continue at the Atalaya Museums, with José Maldonado (‘Gallery’) and, under the direction of  David Coria, Florencia O’Z and Isidora O’Ryan  will address their ‘Antípodas’, within the Muy Personal cycle  .

A cycle that also includes the flamenco harp of  Ana Crismán  and the dance of  Estévez & Paños  (‘Silencios’).

The Toca Toque cycle   has as its main attraction the guitarist Antonio Rey who will reel off songs from his ‘Flamenco sin Fronteras’, an album with which he has obtained the Latin Grammy in its category. Fans of this instrument will also be able to hear Antonia Jiménez leading a musical trio.

As for cante, the Voces cycle   offers, in addition to the already mentioned performances by  Melchora Ortega and Tamara Tañé , a wide variety of registers starring  José Valencia, Jesús Méndez and Arcángel  in the Atalaya Museums.

At the Sala Compañía,  Alfredo Tejada , winner of the Accompaniment Song Award in the last edition of the contest, will also present his new album ‘Identidad’, with the collaboration of Claudia La Debla al baile.

As usual, the De Peña en Peña cycle  , in collaboration with the Local Federation of Peñas Flamencas, promotes the performance of young local artists free of charge.

To this is added a training area that offers 38 courses and workshops at different levels of learning, as well as complementary activities in celebration of this 25th anniversary -a book and a photographic exhibition-; as a space for professionals to reflect on everything that happens in the world of dance; and to address the significance of the figure of Antonio Ruiz Soler on the centenary of his birth.

Collaborating media include Diario de Jerez, Canal Sur Radio, Radio Jerez Cadena Ser, Canal Sur Radio and All Flamenco. The first municipal authority thanked all of them for their involvement in the project.

This website uses cookies to improve your experience while browsing the website. Outside of these cookies, the cookies that are classified as necessary are stored in your browser, as they are essential for the functioning of the basic functionalities of the website. We also use third-party cookies that help us analyze and understand how you use this website. These cookies will be stored in your browser only with your consent. You also have the option to opt out of receiving these cookies. But opting out of some of these cookies may affect your browsing experience.
Necessary Always Enabled
Necessary cookies are absolutely essential for the website to function properly. This category only includes cookies that ensures basic functionalities and security features of the website. These cookies do not store any personal information.
Non-necessary
Any cookies that may not be particularly necessary for the website to function and is used specifically to collect user personal data via analytics, ads, other embedded contents are termed as non-necessary cookies. It is mandatory to procure user consent prior to running these cookies on your website.
SAVE & ACCEPT
¿Podemos ayudarte?
¿Necesitas ayuda?